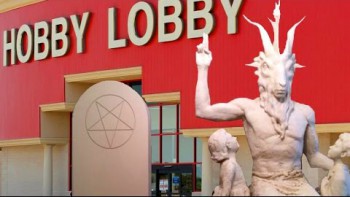 The people running the so-called “Christian” business of Hobby Lobby not only want the legal right to impose their religious beliefs on their employees, but apparently they’ve also been trafficking in illegal religious artifacts from Iraq.  Stuff to put in their own “Bible museum”, no less.  It’s like they’re really crappy villains from some Indiana Jones movie.

In 2011, a shipment of somewhere between 200 to 300 small clay tablets on their way to Oklahoma City from Israel was seized by U.S. Customs agents in Memphis. The tablets were inscribed in cuneiform—the script of ancient Assyria and Babylonia, present-day Iraq—and were thousands of years old. Their destination was the compound of the Hobby Lobby corporation, which became famous last year for winning a landmark Supreme Court case on religious freedom and government mandates. A senior law enforcement source with extensive knowledge of antiquities smuggling confirmed that these ancient artifacts had been purchased and were being imported by the deeply-religious owners of the crafting giant, the Green family of Oklahoma City. For the last four years, law enforcement sources tell The Daily Beast, the Greens have been under federal investigation for the illicit importation of cultural heritage from Iraq.

This is terrifically insane!  And how did they (almost) pull it off?  Easy:  they lied.

One source familiar with the Hobby Lobby investigation told us that this is precisely what happened in this case: The tablets were described on their FedEx shipping label as samples of “hand-crafted clay tiles.” This description may have been technically accurate, but the monetary value assigned to them—around $300, we’re told—vastly underestimates their true worth, and, just as important, obscures their identification as the cultural heritage of Iraq.

Lawbreaking, bearing false witness, pride…  So much for those Christian values.  But really, can we expect much more from people who are so public about their religion?  Seems like the louder you crow about it, the more you’ve got to hide.